The Gospel text appointed for this week by the Revised Common Lectionary is Mark 13:1-8 which begins a section known as the “little apocalypse.” The disciples of Jesus comment on the grandeur of the Temple complex in Jerusalem which leads Jesus to share an ancient Jewish apocalyptic vision of the end of the world.  The disciples, of course, wanted directions on how they will know when the end is near, seemingly so they may be prepared or more probably in the case of Mark’s story, so they may actually recognize it when it appears. (As commentators remind us, Mark is a narrative of several examples of failed discipleship.)  Jesus warns them of the Antichrists, or those who will attempt to mislead the followers for their own glory and to the demise of the faithful.

The images of apocalyptic writings found in scripture are frightening and hopeful at the same time. The graphic descriptions read like a popular horror novel and yet good is always triumphant. The visions of the end of the world presented in scripture rely heavily on an ancient understanding of existence wherein which the forces of good and evil wage battle for control of a dualistic universe. The universe is divided into a spiritual realm and a physical realm. And, depending on your belief system, we are living in the pre-tribulation, tribulation, or post-tribulation age in the physical realm. The Great Tribulation is a chaotic time with great suffering, wars, natural disasters and persecutions (especially religious persecution), typically dominated by the Antichrist or the Beast  or whatever personification of evil fits your fantasy.  I’d list the movies and books written with this ideology, however, no one reads blog posts a mile and a half long (this one’s only a mile). 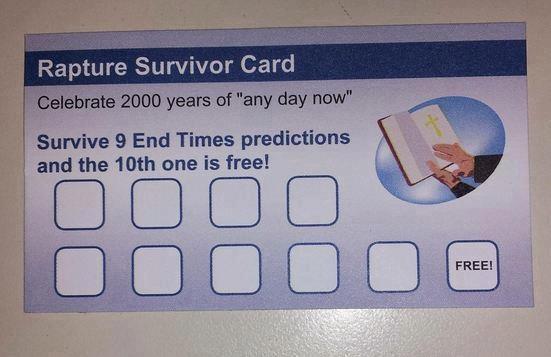 So many signs and so little time to exploit them all for one’s personal gain!

With the Mayan Calendar all but debunked as a prediction of the end of the world, and Harold Camping’s May 21st/Oct 21 predictions out of the way, I’d love to believe that all the hubbub about the end is near would grow quiet. But, of course, throw in a Presidential Election along with a couple natural disasters, especially a climate-change-enhanced super storm, and the fearful will raise the strains of pending calamity!  For example, the Rev. Dr. Robert Jeffress received national attention last week when he took to his bully pulpit at First Baptist Church of Dallas, TX before the election and told his congregation that the President was “paving the way for the future reign of the antichrist.”  Dr. Jeffress stopped short of claiming that President Barack Obama is the Antichrist, but made it clear that he believes the President is opening the door for the apocalypse. Dr. Jeffress urged his congregants to vote for righteousness to delay the way for the Antichrist (which could not have been for Mitt Romney since, Mr. Jeffress declared Mormonism a non-Christian cult in 2007 as Mr Romney began his first, failed attempt to campaign for President.)  And, that was before the election, so better get your end of the world readiness kit ready, right? Not hardly!

Fear of the future is high octane fuel for those who continue to subscribe to a superstitious universe full of powers and principalities chasing after one another and obviously so utterly interested in every person on the planet they will try anything and everything to defend or destroy humanity.  I find it hard, although not impossible, to believe highly educated persons cling to this view of the universe or this notion of God’s final judgement of God’s creation, which God deemed inherently good in Genesis 1, in this time and this place. To reject every accomplishment of discovery made through human history since the first century of the common era, in order to hold onto the fantasy of rapture and cosmic Antichrists, is folly at best and destructive at worst.  But then, what do people like the bold Texas pastor really fear?

Radicalized in the decades following WWII, nationalism infiltrated and conquered much of Christianity in America. Seen as the heroes of the world, defenders of freedom and bearers of light, Americans saw themselves as messiahs for the nations. Having just watched the entirety of Band of Brothers on Veteran’s Day, I can assure you I’m not un-American, anti-patriotic or a secret operative of any foreign agency. I do believe, however, that the once distinct messages of church and country have become blended, re-shaped, twisted and indistinct since the days after the war. The propaganda of war, combined with the challenge of civil rights and liberties created a recipe for the fear we hear in rants and sermons today. The belief that America, especially an America at a specific time in history such as the mid 1950’s, is the light unto all the nations and Savior of the world stirs the stew of apocalypse whenever the definition of “that America” is challenged in any way. So, if I believe “1957 America” (when Anglo Protestants and Catholics were prosperous, other than the arms race peace was presumed, good families all looked like the Cleavers, school children wanted to learn and resembled their teachers in all ways, etc) is the bearer of Salvation for all the world, and my belief  is challenged (by a historical reality check complete with fire hoses turned on segregated peoples, a changing population dominated by new immigrants and black and brown people exercising their citizenship and rights, growing spiritual but not religious or non-religious generations, or a redefinition of the family, etc.) then I may conclude the end of the world is near. And, it is for those who stand to lose the privilege and power they have taken for granted as the “providence of God” who in their imagination chose them to save the world.

The Good News is the re-election of a president is not any more a sign that the end is near, than Harold Camping’s Apocalyptic camper or the incomplete Mayan calendar. Scriptures tell us we will not know, if and when the end will come. And, over and over again, we are told Do Not Fear. That’s because God doesn’t desire for us to be caught up in fear about what the future will bring, but rather to live in this moment with  joyful confidence in God’s grace, mercy, peace and justice revealed in Jesus Christ. When we choose to live without fear of the future, we may begin to see how God’s hopeful, life-giving, justice-bearing spirit is at work all around us bringing us closer to the reign of Christ’s compassion and all-inclusive love. Look around you this week. Where do you see God at work, changing lives, breaking addictions, bringing hope, helping the suffering, supporting the weak, feeding the hungry, ending the root causes of poverty and injustice, caring for the widowed and orphaned, expressing kindness, speaking power to power for the oppressed, forgiving the enemy, or conquering fear?

God is active in the world, this world, right now. Don’t let fear blind you or bind you from being a part of what God is doing in our midst.

Central is a friendly, welcoming, and progressive congregation of the Christian Church (Disciples of Christ) with roots in the American frontier. An active congregation with opportunities for spiritual formation for children, youth, and adults, we are located just two blocks from Olivet Nazarene University. Our current facility was dedicated to the glory of God in 1986 and is accessible for persons of every ability. Sunday worship blends traditional elements with a relevant presentation of the gospel, including weekly participation in the Lord’s supper where all who believe in Jesus are invited to commune. View all posts by Central Christian Church